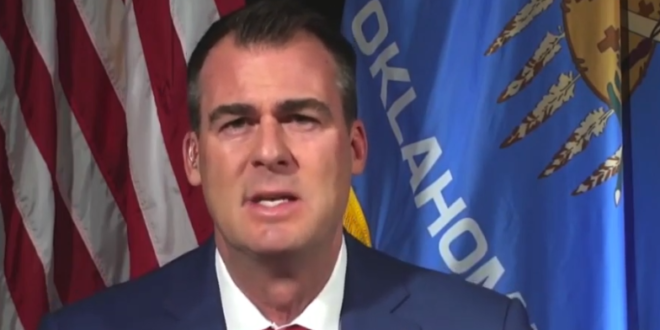 The order also said any building that is owned or leased by the state and is open to the public must rescind any existing mask mandates by Tuesday. It doesn’t prevent anyone from wearing a mask in a state or public building.

The order, does not apply in medical settings with patients, was announced after Stitt signed into law a bill prohibiting schools and colleges from adopting mask or vaccination requirements.

Stitt made national headlines in 2018 when he announced that his six children were not vaccinated against all the usual childhood illnesses, saying he and his wife “pick and choose.”

Stitt, who contracted COVID in July 2020, announced a statewide day of fasting and prayer against COVID in December 2020.

On his inauguration day in January 2019, he declared that the primary mission of his administration would be to “bring people to Jesus.”

He last appeared on JMG last month when he signed into law a bill that legalizes running over protesters. Which is what Jesus would want.

“It is time to return to normal,” he wrote. “In Oklahoma, the standard for normal is freedom.” https://t.co/FTyInoFmwz