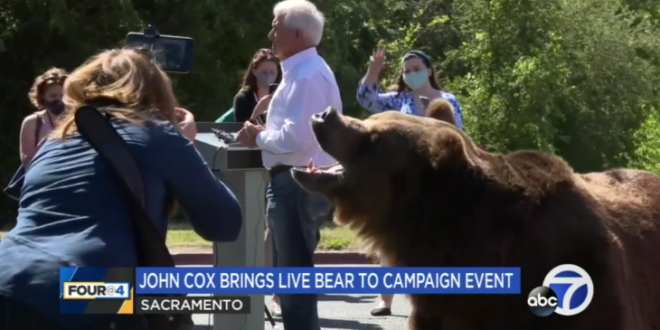 Darren Minier, assistant director of animal care at the Oakland Zoo, called the stunt exploitative and even dangerous. “We don’t see this as often as we used to a few decades ago,” said Minier. “The main reason is because of how unsafe it is.”

“Truthfully with a bear that’s scared, a hot wire is not really going to stop it,” said Minier, referring to the electrically charged wire penning in the bear. “If the hot wire is strong enough to actually stop the bear, it’s a danger (for people) to be around.”

“The coverage yesterday was all about the bear,” bemoans @BeastJohnCox, who brought the bear. Says focus should be on issues making California “unlivable and dangerous.”