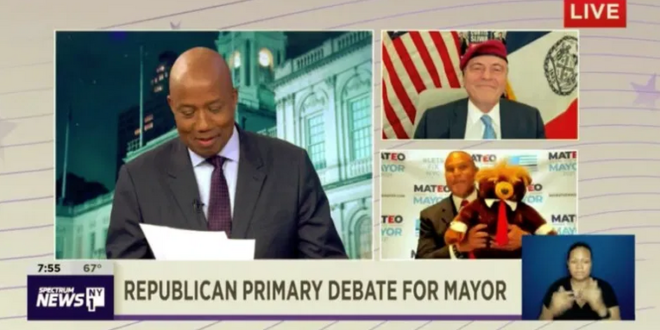 Entrepreneur and business advocate Fernando Mateo and Guardian Angels founder and radio host Curtis Sliwa offered voters an hour of personal attacks and bizarre moments that managed to obscure some legitimate policy ideas each had to offer.

At one point, Mateo – hoping to demonstrate his love for former President Donald Trump – displayed his Trumpy Bear and made a “grrrrr” sound. At another, Sliwa said some bike lanes were so underused you don’t even see Pee Wee Herman riding on them.

From nearly the first moment, the debate descended into shouting and insults. Sliwa accused Mateo of making illegal campaign contributions to Bill de Blasio. Mateo dismissed Sliwa as nothing but a “subway rider,” a “clown” and a “compulsive liar.”

Read the full article. Neither candidate has yet reached the fundraising minimums needed for the debate to be sanctioned by the city’s Campaign Finance Board.

.@errollouis – “Who was the better mayor: Mike Bloomberg or Rudy Giuliani?”@MateotheMayor – “Both. I can’t say there was one better than the other. Both. By the way, I have my Trumpy Bear here. I know @CurtisSliwa has 13 cats. I have a Trumpy Bear. Rerrrrrr rerrrrr rerrrrr.” pic.twitter.com/DrwAuW453l