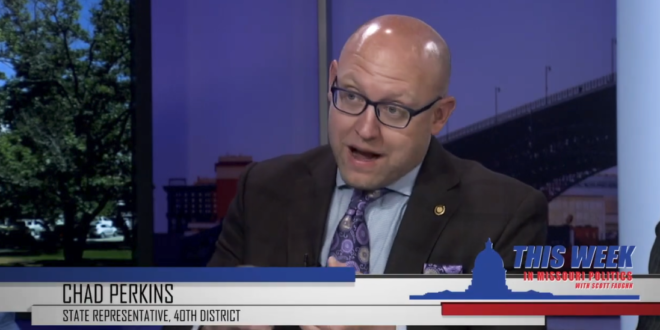 A Missouri lawmaker allegedly used his position as a cop to receive a “sexual favor” from an intoxicated teenage girl in 2015 and his boss, the Pike County sheriff, is accused of attempting to obstruct a probe as the deputy ran for a seat in the Legislature last year, the Post-Dispatch has learned.

According to a report obtained from Frankford Police Chief Josh Baker in response to an open records request, state Rep. Chad Perkins, a Bowling Green Republican, allegedly accepted “sexual favors from a teenage girl while on duty” as a police officer.

Perkins, who said he is a “single man,” said his relationship with the teen was consensual. “There’s nothing to that. Nothing ever happened while I was on duty,” he said. “I live a single man lifestyle.”

Read the full article. Perkins is a country music radio host and the former mayor of Bowling Green.

“There’s no victim here.” 🤬
“Do everything to get Perkins elected.” 🤪

There. Is. No. Consent. If. Intoxicated.

He cosponsored a bill
that charges a LEO who has sex with a detainee or prisoner of a class E felony. That’s rich. #moleghttps://t.co/hcxEpw0uSh

Previous DeSantis Threatens To Fine Celebrity Cruises $5000 For Every Passenger Asked For Proof Of COVID Vaccination
Next Greene: Gaetz And I Are “Taking Charge” Of The GOP