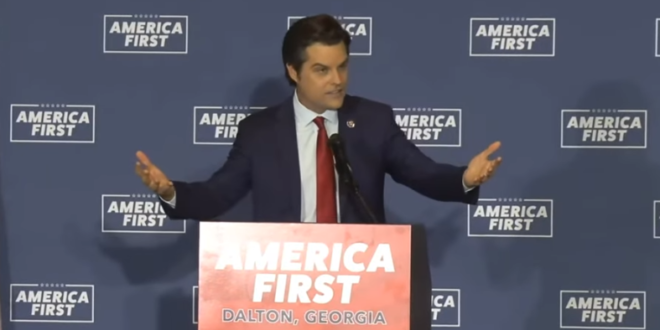 “The internet’s hall monitors out in Silicon Valley, they think they can suppress us, discourage us — maybe if you’re just a little less patriotic, maybe if you just conform to their way of thinking a little more, you’ll be allowed to participate in the digital world.

“Well, you know what? Silicon Valley can’t cancel this movement or this rally or this congressman. We have a Second Amendment in this country, and I think we have an obligation to use it.

“The Second Amendment is about maintaining, within the citizenry, the ability to maintain an armed rebellion against the government if that becomes necessary.” –   Matt Gaetz, at a rally yesterday with Marjorie Taylor Greene in her home Georgia district.

This is not speech protected by the first amendment. This is beyond yelling fire in a theater. https://t.co/FyIcIqqsIl

NEW: Tonight Florida Congressman Matt Gaetz, who is under investigation over allegations of prostitution and public corruption, suggested conservatives shoot people in Silicon Valley for their “cancel culture.” pic.twitter.com/5cOIyAnJDT

Dear @GOPLeader: You need to remove Rep Matt Gaetz from the House Judiciary Committee. It’s a conflict of interest for Gaetz to have oversight over the DOJ that is investigating him for sex crimes.