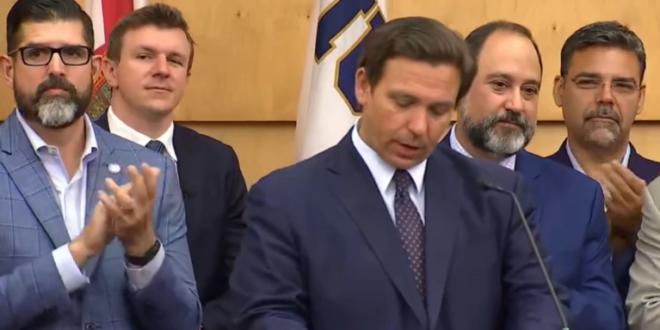 “This session, we took action to ensure that ‘We the People’ — real Floridians across the Sunshine State — are guaranteed protection against the Silicon Valley elites,” said Governor Ron DeSantis.

“Many in our state have experienced censorship and other tyrannical behavior firsthand in Cuba and Venezuela. If Big Tech censors enforce rules inconsistently, to discriminate in favor of the dominant Silicon Valley ideology, they will now be held accountable.”

All Floridians treated unfairly by Big Tech platforms will have the right to sue companies that violate this law — and win monetary damages.

This reform safeguards the rights of every Floridian by requiring social media companies to be transparent about their content moderation practices and give users proper notice of changes to those policies, which prevents Big Tech bureaucrats from “moving the goalposts” to silence viewpoints they don’t like.

The Attorney General of Florida can bring action against technology companies that violate this law, under Florida’s Unfair and Deceptive Trade Practices Act.

If social media platforms are found to have violated antitrust law, they will be restricted from contracting with any public entity. That “antitrust violator” blacklist imposes real consequences for Big Tech oligopolies’ bottom line.

Any Floridian can block any candidate they don’t want to hear from, and that is a right that belongs to each citizen — it’s not for Big Tech companies to decide.

Florida Gov. Ron DeSantis signed a bill Monday that aims to punish social media companies for their moderation decisions, a move that was immediately criticized by Silicon Valley and likely sets the stage for potential legal challenges. https://t.co/pIkmeXU0tA

Ron DeSantis signed this Trump Social Media Protection Law today along side alt-right activist James O’Keefe of Project Veritas. It allows Floridians like Trump ability to sue for being de-platformed. I am sure Trump’s lawsuit is already drafted https://t.co/tCLoE7N46d

This is what it looks like when you have a Gov who is so afraid to take questions from the media that he has to surround reporters with his supporters to cheer on his answers and heckle reporters asking questions. The Banana Republic of FL. What a coward. pic.twitter.com/t3kbsPQ2m6

Oh, look who Desantis has up there at his ‘Big Tech’ bill signing – the reprehensible, banned, doctored-video king, James O’Keefe of Project Mendacium. pic.twitter.com/EmZQyZ9NTD

Project Veritas’ James O’Keefe, who was positioned directly behind DeSantis, has been behind many attempts to intentionally mislead the public.