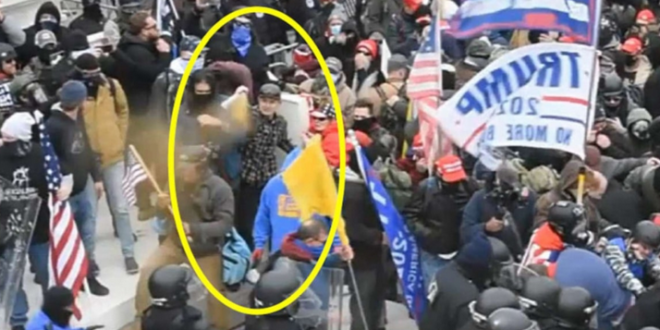 “There is a second amendment behind us,” 34-year-old Sean Michael McHugh allegedly taunted officers, according to his criminal complaint. “What are you going to do then?” Arrested on Friday, McHugh faces eight charges, including assaulting law enforcement with a deadly weapon.

Like several others at the assault on the Capitol, McHugh stands accused of spraying police with chemicals. Prosecutors say McHugh helped fellow rioters push a large metal sign into the officers and yelled: “Put it up there! Put it up there!”

“You guys like protecting pedophiles?” McHugh allegedly asked at one point, in what appears to be a reference to the QAnon conspiracy theory.

Accused U.S. Capitol Rioter Charged With Spraying and Prodding Police, Then Taunting Them About the Second Amendmenthttps://t.co/mKuUW4krJD

Yesterday, a CA man was arrested for crimes related to the breach of the Capitol on Jan. 6, which disrupted a joint session of Congress in the process of ascertaining and counting the electoral votes related to the election. Learn more from @USAO_DC: https://t.co/RpU5l4wgun

DOJ announces another arrest in the U.S. Capitol siege docket:

McHugh also allegedly pushed a large metal sign at officers and taunted: “There is a second amendment behind us, what are you going to do then?” pic.twitter.com/K36RZiAXiE