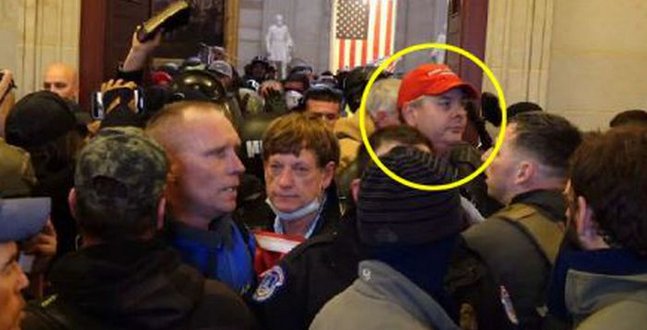 Facebook Friends Turn In “It Was Antifa” Riot Suspect

A Chuluota man who bragged on social media about being inside the U.S. Capitol during the Jan. 6 riot was arrested Monday, adding to the growing list of Central Florida residents involved in the deadly ordeal, according to the U.S. Attorney’s Office for the Middle District of Florida.

John Maron Nassif, 55, also was captured on surveillance footage inside the Capitol rotunda, an arrest affidavit said. “You know I was there, right?” Nassif wrote on Jan. 8, the affidavit said. “You don’t find it odd that police officer is welcoming everybody in? Considering the narrative that’s being pushed?”

A review of Nassif’s Facebook page also shows memes and news stories that say the riot was organized by left-wing groups such as Antifa.

‘You know I was there, right?:’ Another Capitol riot suspect arrested in Central Florida, feds say https://t.co/RNRCxHTwf5 pic.twitter.com/OC6eSxxxrs

A Winter Springs mam, John Maron Nassif, has been arrested in connection with the attack on the U.S. Capitol. The FBI says friends turned him in after he posted photos on Facebook. He’ll appear in Federal Court at 1:30 today and we’ll have live coverage starting on @WESH at 4. pic.twitter.com/aPdU40ec2O

NEW: John Maron Nassif was taken into custody today by #FBI Tampa on charges related to his role in the riot and siege at the U.S. Capitol on 1-6-21. Updates will be posted here: https://t.co/MJdhjyE9HC pic.twitter.com/erL4XXRk8N