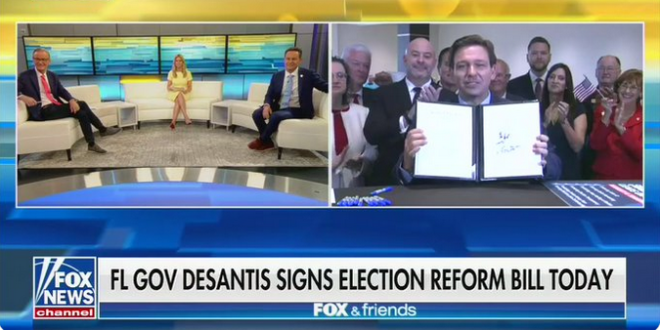 The GOP-backed legislation, which the governor has also been a vocal supporter of, places new limits on ballot drop boxes, among other things.

Critics of the bill have called the measure a piece of voter suppression. Democratic lawmakers have said SB 90 would make it harder for seniors, people of color, and individuals with disabilities to vote.

BREAKING: Florida’s DeSantis signs new voting restrictions into law, making the state the latest to add hurdles to the voting process. Press not allowed in, other than Fox & Friends

Definitely not a GOP propaganda network just the network getting exclusive access to a Republican governor’s signing ceremony for a bill to curtail voting so he can do it during a live Fox & Friends interview. pic.twitter.com/2FQp0zqxVQ