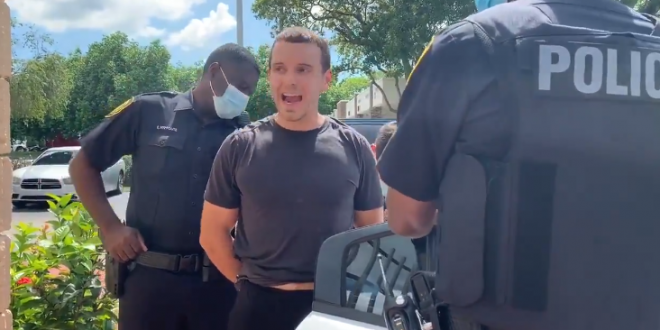 DeSantis Grants Clemency To Covidiot Gym Owner Arrested Three Times, All Those Fined To Be Pardoned

Florida Gov. Ron DeSantis is granting clemency to a Broward County gym owner who was arrested several times for not enforcing mask orders during the COVID pandemic. During a Fox News segment where both Mike Carnevale and his wife Jillian were being interviewed, DeSantis called the arrests a “total overreach.”

The Governor added the state’s clemency board would issue pardons to all Floridians who received fines for masks and social distancing violations during the pandemic. Carnevale was arrested three times over the summer and appeared before a judge in March over several charges of failing to comply with an emergency order.

Read the full article. As I reported at the time, the gym owner’s arrests resulted in covidiot rallies led by a cultist GOP state rep closely aligned with Matt Gaetz.

Previous Labor Dept: New Jobless Claims Hit Pandemic-Era Low
Next Fauci: You Can “Put Aside Your Mask” When Outside