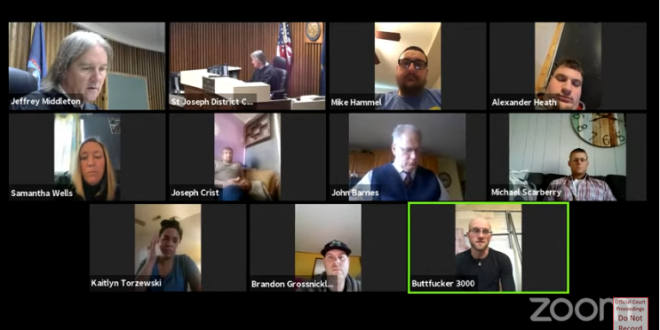 Defendant Appears At Hearing As “Buttfucker 3000”

A defendant showed up to a court’s Zoom stream with a deeply unfortunate screenname. No, his name was not really “Buttfucker 3000.”

This happened in an arraignment hearing posted to YouTube on Tuesday from the court of Judge Jeffrey Middleton in St. Joseph County, Michigan. There was a brief pause before the defendant realized the judge was talking to him. He appeared to say his name as “Nathaniel Saxton.”

“Your name’s not Buttfucker 3000, you yo-ho, logging in to my court with that as your screenname.” said the judge, later adding, “What kind of idiot logs into court like that?”

Read the full article. Later the defendant appeared to blame his sister for the screenname.