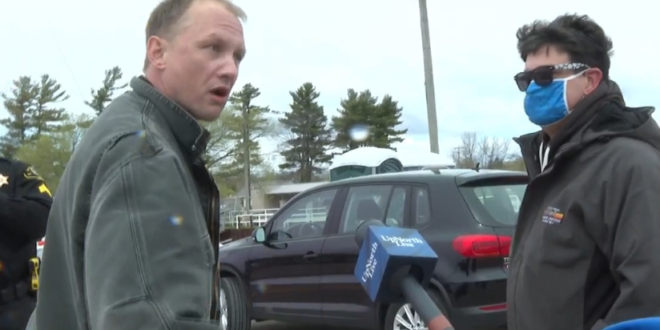 Gov. Gretchen Whitmer’s three-spot tour across northern Michigan on Thursday, May 6, 2021, took her to Leelanau County. There, she signed a bill appropriating millions of dollars to protecting the state’s natural resources. And while the environment was supposed to be the focus, attention shifted when a protestor verbally targeted the governor and then local media.

“We don’t want you here,” the man shouted as Whitmer was speaking. “Go back to Lansing.” Whitmer did not skip a beat as the man also shouted profanity at her during her speech.  He then turned his attention to the UpNorthlive News crew, asking if he should destroy the reporter’s camera before taking a microphone and throwing it. Sheriff’s deputies who had been watching arrested the man immediately.

Read the full article. As he was being arrested, the man, who was already known to police, reportedly spat at the news crew. At this writing he remains jailed on charges of assault and malicious destruction of property.

A man has been arrested for assaulting a TV news crew that was covering a Gov. Whitmer event today.https://t.co/9fpsP0FjCS