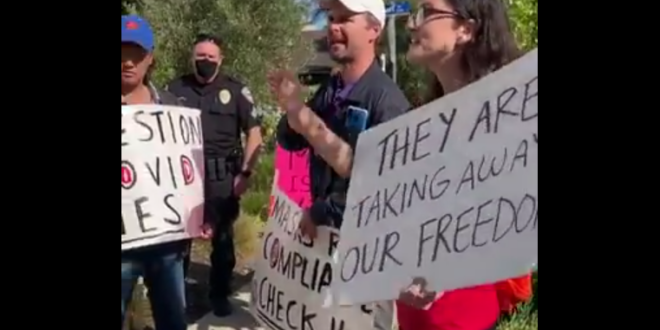 A group of anti-mask protesters stood outside Santa Monica schools Monday, harassing students and parents just outside the campus. “You’re not supposed to talk to other people’s children, OK?” One father, who confronted the group outside the school said. “You’re walking around a school. Creepy.” He told them to stay away from kids at John Adams Middle School and Will Rogers Elementary. A woman confronted the group and described losing three loved ones to the coronavirus.

This is the third such protest in Los Angeles that I’ve documented. pic.twitter.com/qqozOF2zBd

A man walking a dog yells at the protesters to “get the fuck out of my neighborhood.” pic.twitter.com/DjqlZ4ea2R

A woman tells a protester that she has lost 3 family members to covid. The anti-masker says “it probably wasn’t even Covid that killed them.“ pic.twitter.com/GU2EmFVofa

A parent confronts the anti-mask protesters over approaching his son. He tells them they shouldn’t talk to other people’s children. pic.twitter.com/1Jd2A2tBUM

Dr. Pope asks an anti-masker to explain what “agenda” COVID-19 serves and to name the “they” behind it. The protesters answer that the agenda “is about control” in order to “depopulate the world.”

“I just told you, it’s about control. It’s about depopulation.” pic.twitter.com/CNo34zGfv7

BREAKING: County Supervisor Sheila Kuehl confronts anti-masker protesters at her home in Santa Monica. When one protester says that HIV doesn’t cause AIDS, Khuel takes a step forward and points a finger. “You are really crossing a line now. How many people did you lose to AIDS?” pic.twitter.com/wYeG2DMFIK