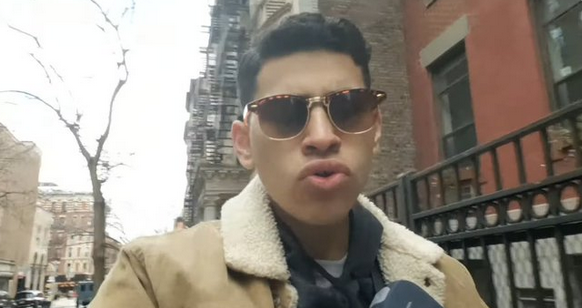 A popular YouTuber accused of live-streaming a bomb threat in Manhattan is out on bail to get psychiatric treatment, a federal judge ruled. Malik Sanchez, who uses the online moniker “Smooth Sanchez,” was released from the Essex County jail in New Jersey.

Sanchez, 19 was locked up after arrest on April 14 for proclaiming “Bomb detonation in two, in two minutes. I take you with me and I kill all you,” during a YouTube live-stream. He is a self-proclaimed incel, which is short for involuntary celibate.

Judge Colleen McMahon ordered Sanchez be released into strict home confinement during a May 6 hearing, which was not publicly disclosed until after it occurred.

In a charging document, an FBI agent wrote that he reviewed a number of videos that showed Sanchez accosting other women on Manhattan streets, including one in which he praises Elliot Rodgers, a self-proclaimed incel who killed several people in California in 2014.

In another video, he turned to a group of people on a stoop and said, “I pull out Glocks, baby,” while invoking Rodgers’ name.

His hoax bomb threats involve rushing up on strangers while playing audio of a man screaming in Arabic. Panicked diners have fled sidewalk restaurants in result. Sanchez’s other alleged stunts include screaming threats at people wearing masks while his live-stream audience eggs him on and sends donations. His YouTube channel remains active, although he’s not posted since his arrest. He faces five years in federal prison.

Popular YouTuber accused of livestreaming bomb threat in Manhattan out on bail to get psychiatric treatment.

Malik Sanchez, who uses the online moniker “Smooth Sanchez,” is a self-proclaimed incel, which is short for involuntary celibate.https://t.co/Ng0YGH2vdM