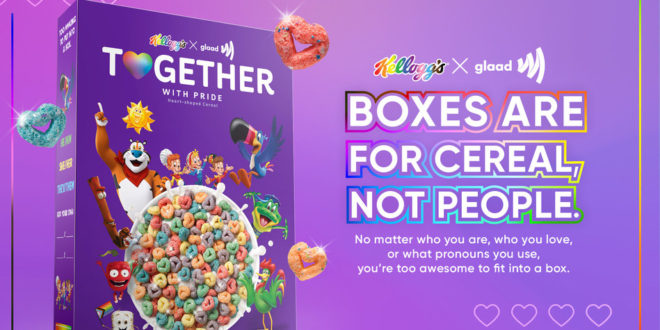 Starting mid-May and for the first time in conjunction with Pride month, Kellogg’s Together With Pride cereal will be available at select major retailers nationwide. The delicious new recipe features berry-flavored, rainbow hearts dusted with edible glitter.

Have you ever thought that eating glitter for breakfast might be a good idea? If so, Kellogg’s has the product for you. The new “Together” cereal features heart-shaped Froot Loops with a coating of edible sparkles to promote LGBT “Pride” Month – and fund one of America’s most anti-free speech organizations.

If you’ve heard of GLAAD, you know they pressure corporations and schools to promote their ideology that free speech in schools shouldn’t exist. Just as bad, and with far worse implications, is GLAAD’s support for the deceptively named Equality Act.

This proposed piece of legislation effectively prohibits any pushback against left-of-center views about the LGBT issue, even by faith-based groups.

The act would not only force religious organizations to validate every aspect of the LGBT agenda – it would explicitly forbid them from using the Religious Freedom Restoration Act to challenge the new law.

The so-called Equality Act is an unprecedented attack on freedom of expression, and Kellogg’s has gone all-in on backing it.

The company will be donating $50,000 to GLAAD, and Kellogg’s chief diversity officer – a position that more and more major corporations have created as they cave to ideological pressure from the left – has endorsed GLAAD’s agenda.

Kellogg’s has made it clear where it stands. We encourage our readers to do the same. With a 2ndVote score of 1.00, Kellogg’s is a poor choice for values-conscious consumers.

Instead of buying food coloring-soaked hearts coated with glitter, consider a healthier offering from a different brand that serves its customers instead of bowing to far-left activists.

2nd Vote last appeared on JMG last month when they issued a money beg to help them cancel “woke companies” and “defend our freedoms.”

We also heard from them in December 2019 when they called for boycotting Chick-Fil-A because “LGBT unicorns have vowed to destroy Christianity.”

Why yes, I did throw this in my @Target cart shopping today without a second thought. they’ve also got a big variety of fantastic #LGBTQ merchandise available in store and online. LOVE how supportive they are! And scan your receipt so Kellogg’s can donate $3 to GLAAD! pic.twitter.com/obz2kQVocA