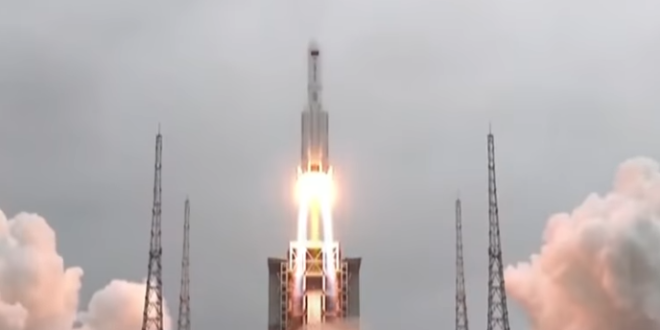 Debris from a rocket launched by China crashed back to Earth on Sunday, landing in the Indian Ocean, according to China’s space agency, after days of speculation over when or where it could end up. Parts of the Long March 5B rocket re-entered the atmosphere at 10:24 a.m. Beijing time (10:24 p.m. ET), the China Manned Space Agency said.

The coordinates put the point of impact in the Indian Ocean somewhere above the Maldives archipelago and south of India. The 98-foot-long, 20-ton section rocket launched on April 29 carried the main module of the country’s new space station, and was the first of the expected 11 missions necessary to complete the project.

NASA has lambasted China for its failure to “meet responsible standards” after debris from its out-of-control rocket likely plunged into the Indian Ocean Saturday night. “Spacefaring nations must minimize the risks to people and property on Earth of re-entries of space objects and maximize transparency regarding those operations,” said NASA Administrator Sen. Bill Nelson in a statement. “China is failing to meet responsible standards regarding their space debris,” he added.

“It is clear that China is failing to meet responsible standards regarding their space debris.”https://t.co/O3P0kXXeQ0 pic.twitter.com/hotM5b2ri1

BREAKING: Rocket is down, China says in Indian Ocean near Maldives. #ChineseRocket pic.twitter.com/gMspI72eVL

Aren’t you glad Trump gave us a Space Force?#ChineseRocket🚀