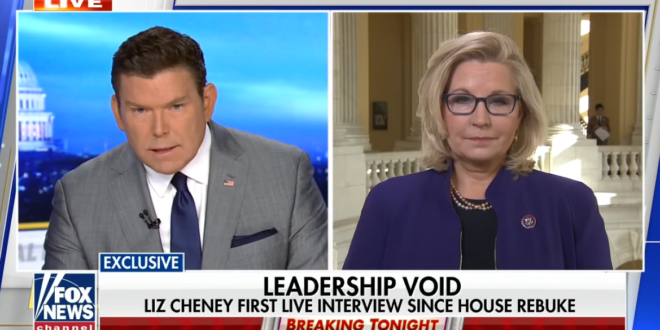 Rep. Liz Cheney (R-WY) confronted Fox News anchor Bret Baier on his network’s responsibility to tell its viewers that the 2020 election was legitimate.

“We all have an obligation and I would say Fox News — especially, especially Fox News — has a particular obligation to make sure people know the election wasn’t stolen,” Cheney told Baier in an interview on Thursday.

Baier assured Cheney, “We have said that numerous times.” “Fox News needs to make sure,” Cheney replied. The pair began to speak over each other as Cheney defended her comments and Baier defended his network and show.

Read the full article. Smartmatic is suing Fox News and multiple hosts for $2.7 billion over their election lies.

Liz Cheney: Fox News needs to tell people the election was not rigged

Fox anchor Bret Baier: We on this show don’t do that

Baier: Here to comment on the Liz Cheney interview, the author of the book RIGGED pic.twitter.com/3WA2ZQEa34