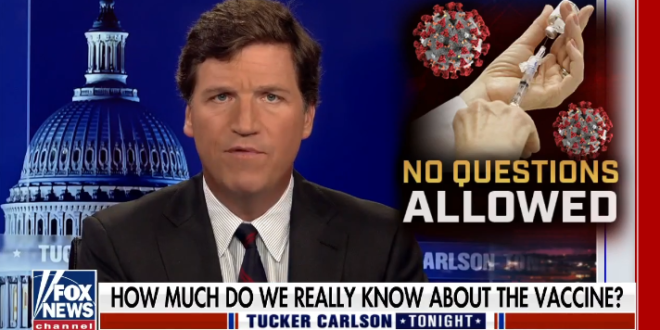 In what has become a commonplace occurrence these days, Fox News host Tucker Carlson addressed a controversy purely of his own making on Thursday night, this time regarding his dangerous and sloppy suggestion that dozens of Americans a day are dying from the coronavirus vaccines.

How did he explain away the highly misleading and disingenuous speculation? Well, by blaming it all on President Joe Biden, of course. After mocking his critics for telling him the VAERS numbers are untrustworthy, he wanted to know why “hasn’t the Biden administration fixed its reporting system” and “what are the real numbers.”

A portion of last night’s transcript:

How much harm have the Covid vaccines caused? It’s not an outrageous question. All medicine can cause harm, acetaminophen can cause harm. In this case, it’s a medicine that’s being distributed to, as the president said the other day, 70% of the U.S. population, it’s fair to ask how much harm will this medicine cause?

But again, no one has told us. Their position is, you don’t need to know the rate of injury. That doesn’t matter. Anyone who asks about harm is immoral. That’s what they’re arguing.

If you ever find yourself arguing that, then you will know for certain you have lost the thread. You are no longer at that point advocating for public health, you’re doing something else entirely.