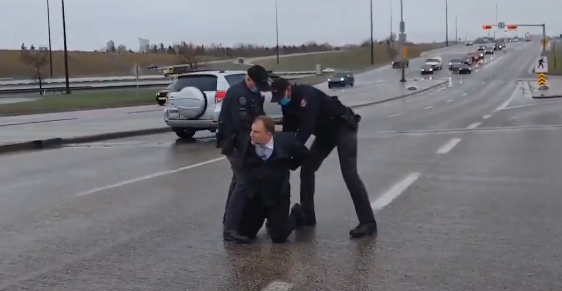 Calgary police have arrested two organizers of a church service who have been defying public health restrictions throughout the pandemic. On Saturday, Artur and Dawid Pawlowski were charged with organizing an illegal in-person gathering, inciting or inviting others to attend an illegal gathering, as well as promoting and attending the gathering.

Throughout the pandemic, the brothers have held large, maskless gatherings and have denied health officials entry to the church, which is located in the southeast neighbourhood of Dover. AHS has said previously that attempts by health inspectors to enter the church have been met with abusive language and racial slurs.

Artur Pawlowski was fined last year for failing to adhere to COVID-19 restrictions, and has drawn controversy for past comments, like when he said Calgary’s flooding in 2013 was caused by God’s tears over homosexuality.

Artur Pawlowski was at the rally outside Manitoba’s law courts building on Monday. He did not self-isolate for 14 days after entering the province. https://t.co/pp0Z7BoJhI

A heavily-armed SWAT team just took down a Christian pastor heading home from church. Police say he’s charged with “inciting” people to go to church. This is the second pastor jailed this year. We’re crowdfunding his lawyers at https://t.co/bMwAj1iNfP pic.twitter.com/RZ913cQns3

Previous Putin Warns Of Nazi Threat At Red Square Parade
Next GOP Rep: Speak Against Trump And We Will Oust You