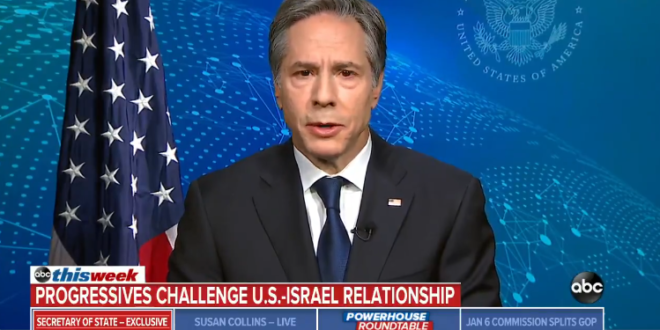 Blinken On Israel: US Still Behind Two-State Solution

Secretary of State Antony Blinken on Sunday affirmed President Joe Biden’s commitment to a two-state solution for Israel and Palestine, arguing that without solutions that afforded Palestinians more dignity, the cycle of violence was likely to continue.

“Ultimately, it is the only way to ensure Israel’s future as a Jewish and democratic state, and of course the only way to give the Palestinians the state to which they’re entitled,” he told host George Stephanopoulos on ABC’s “This Week,” while acknowledging that it would take some time to get to that point.

Blinken credited Biden’s quiet diplomacy for the cease-fire secured between Hamas, which controls Gaza, and Israel.

Secretary of State Antony Blinken said the Biden administration will follow through with a $732 million arms sale to Israel — despite opposition from progressive Democrats like Rep. Alexandria Ocasio-Cortez and Sen. Bernie Sanders.

“The president’s been equally clear. We are committed to giving Israel the means to defend itself, especially when it comes to these indiscriminate rocket attacks against civilians. Any country would respond to that, and we are committed to Israel’s defense,” he said.

As some Democrats fall out of lock-step support of Israel and placing pressure on Pres. Biden, Sec. of State Anthony Blinken defends the president’s “relentless focus” on “quiet, but I think effective diplomacy is getting to a cease-fire.” https://t.co/e1frPTdidv pic.twitter.com/SOnpU58BvN