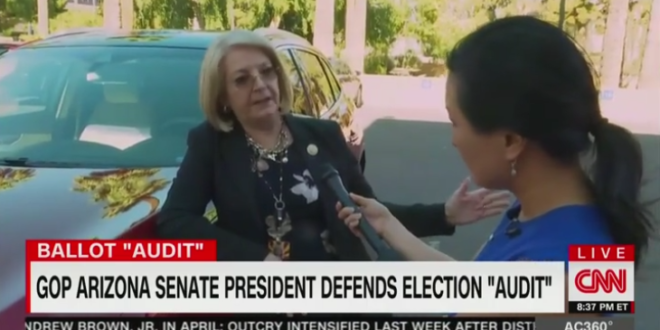 KYUNG LAH (CORRESPONDENT): What the facts are, may be the disconnect. Fann defends the pro-Donald Trump media organization, One American News network, or OAN, as being the only outlet given extensive access to the review.

KAREN FANN: First of all, when we talk about transparency, from day one, the entire process has been live streaming. So, anybody —

LAH: On OAN. With cameras controlled by OAN.

FANN: Okay. I’ll remember that. CNN is saying that OAN is not a credible one.

Maricopa Co Supervisor Bill Gates recalled a phone call with AZGOP Senate President Karen Fann last November, as Republicans faced crushing anger from pro-Trumpers: “She said, ‘Look, Bill, we know there’s nothing to this, but we’ve got to do something, will you guys do an audit?” https://t.co/KZYuB9QXmv