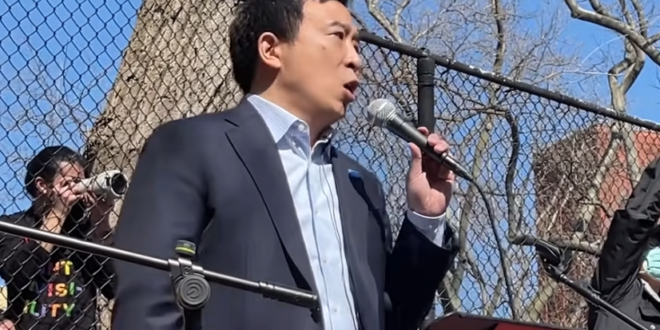 Andrew Yang, the former presidential candidate and leading contender for mayor of New York City, met with a prominent L.G.B.T. Democratic political organization on Wednesday to seek its endorsement. It did not go particularly well.

In an interview with the Stonewall Democratic Club of New York City, Mr. Yang cited gay members of his staff as apparent evidence of his openness to the club’s concerns, and expressed enthusiasm about the prospect of visiting Cubbyhole, a storied New York lesbian bar, participants said.

He proactively talked about resurrecting the city’s Pride March, but failed to pay sufficient heed to more substantive issues they were actually concerned about, including homelessness and affordable housing, they said.

Read the full article. One member on the call described the pitch as “Michael Scott levels of cringe and insensitivity.” According to the most recent poll, Yang holds a strong lead in the NYC mayoral race. As you can see below, the club’s endorsement went to current NYC comptroller and former Manhattan borough president Scott Stringer.

Andrew Yang made offensive, pandering remarks focused on parades and gay bars to a prominent LGBTQ group he is seeking an endorsement from, members said, adding that he failed to address substantive issues they were concerned with, including homelessness. https://t.co/ZbXEshxShr

“When I see a candidate come in just with Michael Scott levels of cringe and insensitivity, it either tells me Yang is in over his head or is not listening to his staff. Those are both radioactive flashing signs that say he is not prepared to be Mayor.”https://t.co/1eJQBKL46j

Can you imagine a more uptight crowd than these woke Dem pols? I’m sure plenty of gays will back Yang precisely because these people are ‘offended’ by him.https://t.co/gzvqEvN55Q

.@SDNYC endorsed @scottmstringer for mayor and @bradlander for comptroller during the club’s endorsement meeting last night.https://t.co/hUmKYg39jg