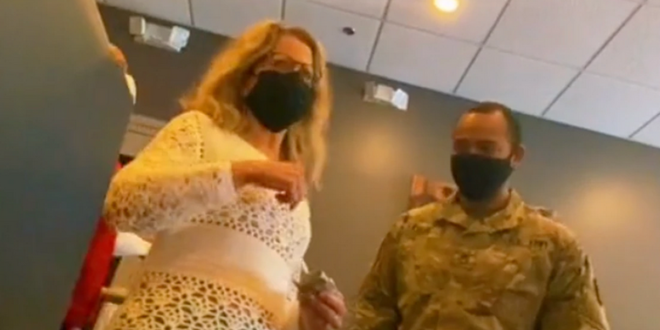 Disturbing video captures a white woman flipping out on a group of black soldiers at a Virginia IHOP after she offered to help pay for their meal — but then accused them of stealing her money. One of the four soldiers from Fort Belvoir who ate at the nearby pancake joint recorded the incident and posted it on TikTok.

“She offered to pay for their meal, which is not uncommon when people meet military personnel, it’s a gesture as a way to thank them for their service,” said Joe Richard, director of public affairs for Fort Belvoir, in a statement to Military Times. “She placed $30 on their table.”

Moments later, however, she took $24 back, leaving just $6 on the table as she exited, Richard noted. Shortly thereafter, she returned to the restaurant and began harassing the four of them, claiming that they had stolen her money. “You guys are shitbags,” she said.

“Are you the thin blue line, are you BLM, are you antifa?” she is heard yelling. It isn’t clear in the video whether the woman is asked to leave the IHOP following the confrontation, but the soldiers are seen leaving of their own accord.

A manager is seen coming over to hear the other patron’s description of the incident as they leave. “IHOP and its franchisees do not condone the statements made by the guest in this video, and will not tolerate racism, bigotry or harassment of any kind,” the chain said in a statement.

The videos, compiled below, have over 2M views on TikTok.

Previous DOJ Now Expects To Charge Over 500 For Capitol Riot
Next Newsmax Host: If We Take All The Carbon Dioxide Out Of The Atmosphere, How Will The Trees Make Oxygen?