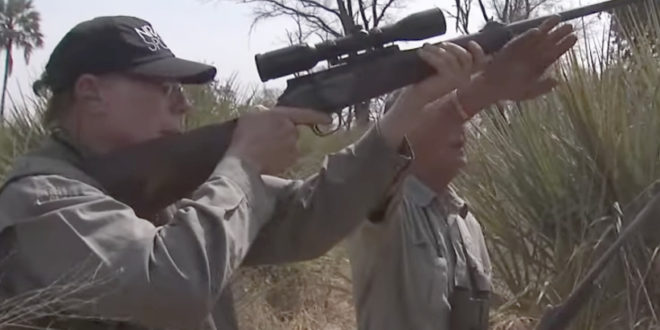 The New Yorker obtained a copy of the footage, which has been hidden from public view for eight years. It shows that when guides tracked down an elephant for LaPierre, the N.R.A. chief proved to be a poor marksman.

After LaPierre’s first shot wounded the elephant, guides brought him a short distance from the animal, which was lying on its side, immobilized. Firing from point-blank range, LaPierre shot the animal three times in the wrong place. Finally, a guide had the host of “Under Wild Skies” fire the shot that killed the elephant.

Later that day, Susan LaPierre showed herself to be a better shot than her husband. After guides tracked down an elephant for her, Susan killed it, cut off its tail, and held it in the air. “Victory!” she shouted, laughing. “That’s my elephant tail. Way cool.”

In the Okavango Delta, the top US gun lobbyist disastrously botches an elephant hunt. “Firing from point-blank range, LaPierre shot the animal three times in the wrong place.”https://t.co/rbKG9SfTDY via @NewYorker

Previous White House: No Decision Yet On Vax Patent Waivers
Next Miller Sues Biden For “Racism” Against White Farmers