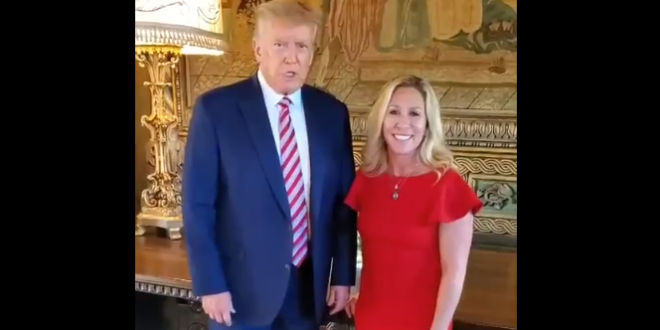 “It’s great to be with Marjorie,” Trump said in the video. “She’s really a very special person, she’s out there fighting hard and the people of Georgia love her.” “Thank you very much, Mr. President, and the people love you,” Greene replied.

The mutual embrace between Trump and Greene comes as the former president keeps spreading lies about the 2020 election, defended his violent supporters who attacked the U.S. Capitol, and remains legally embattled for his role in ginning up the insurrection.

Great to spend time with the greatest (& my President), Donald J. Trump at Mar a Lago today!

He is the leader of the R Party & his America First policies will lead our party to victory in ’22 AND in ’24.

Thank you President Trump for always fighting so hard for Americans First! pic.twitter.com/qmCgBx9X57

Did you talk about the “Mark of the Beast.?” pic.twitter.com/YNy2CJ8CPz

Marjorie Taylor Greene says that a vaccine passport is "Biden's Mark of the Beast" and that any company the requires one is engaging in "corporate communism." pic.twitter.com/XtTvqw83tU

Previous Wisconsin Seeks Legal Fees From Kraken And Trump
Next Prophet: Trump’s Signature Is On The Latest Stimulus Checks [It Isn’t], Which Proves He’s Still Our President