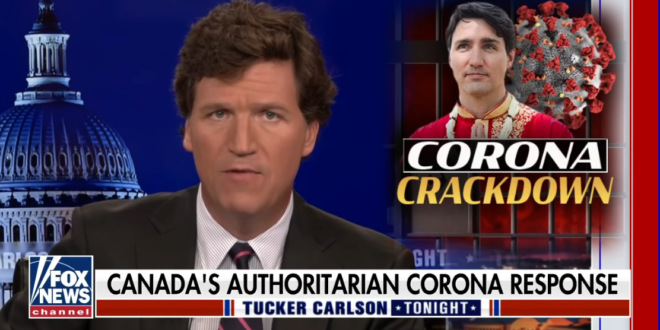 Tucker Carlson: Canada Is Forcing People Into “COVID Internment Camps” And That Might Happen Here Too

What if your next-door neighbor suddenly went dangerously insane and started holding people hostage in his house? Would you consider that threatening? Would you even notice? These aren’t theoretical questions. Something very much like that just happened in our neighborhood.

On Monday, the country’s prime minister, Justin Trudeau, outlined his government’s new corona regulations. Canadians hoping to return to their country must be tested before and after takeoff, he said, adding: “If your test results come back positive, you’ll need to immediately quarantine in designated government facilities. This is not optional.”

Suddenly, Canada is a flagrant violator of the most basic human rights. Fail a COVID test and they’ll lock you up without trial. Go ahead and try to disobey. According to the Canadian government, anyone who attempts to avoid detention in a government internment facility could face a million-dollar fine and three years in prison.

Carlson goes on to attack Biden’s State Department for not objecting to these “internment camps” – which, of course, are actually hotels, just as in many other countries.

In the piece linked above, Carlson sites the grievous example of a man who didn’t get his room service in time and had to go down the lobby to complain. Which is worse than waterboarding, really.

Canadians will not be forced into COVID-19 internment or containment camps, a spokesperson for Health Minister Patty Hajdu said Tuesday — taking aim at a disinformation campaign that has been circulating on social media for weeks. The claim that the federal government is preparing to forcibly intern Canadians is patently false, the spokesperson said.

The federal government has announced funding for voluntary quarantine sites for some of the country’s homeless and has made plans to expand self-isolation capacity for returning international travellers without suitable places to go, but Canadians will not be compelled to leave their homes for so-called COVID “camps.”

Ontario MPP Randy Hillier, a vocal anti-masker who has likened the current pandemic to a bad flu season, has been warning his eastern Ontario constituents that the federal government is preparing to establish these “camps” for COVID patients.