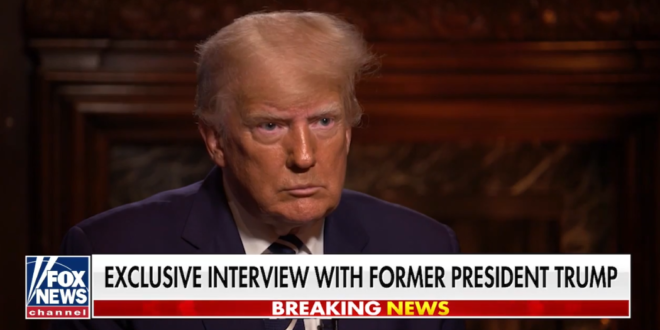 In an exclusive, hour-long interview, former President Donald Trump told “Hannity” Monday that he will “very seriously” consider running again in 2024 if the Republican Party can “get the right people” on Capitol Hill. “It’s very important that we get the right people. That means in the Senate, that means in the House,” Trump told host Sean Hannity.

“Look, I’ve got tremendous numbers … there is more popularity [for me] now than there was the day before the election, because they see how bad things are at the border. They see what is going on, they see that their guns are gonna be gone … their taxes are going up. Regulations are going through the roof. Job [losses] are going to go up…

“So,” he concluded, “I say this. I am looking at it very seriously. Beyond seriously. From a legal standpoint, I don’t want to really talk about it yet. it’s a little too soon.”

Trump’s comments to Hannity on Kim Jong Un and Vladimir Putin are beyond parody pic.twitter.com/AgsS4FvH4P

Hannity kicks off his interview with Trump with this hard-hitting question:

“You are working as hard as you did when you were in the White House. Except to play a little golf more. You are keeping an insane schedule, seven days a week. You really don’t stop!” pic.twitter.com/0fH9YQ8PhS

Previous COVID Denier Ted Nugent: I’m Very Sick With COVID
Next State Department: Do Not Travel To Most Of Planet