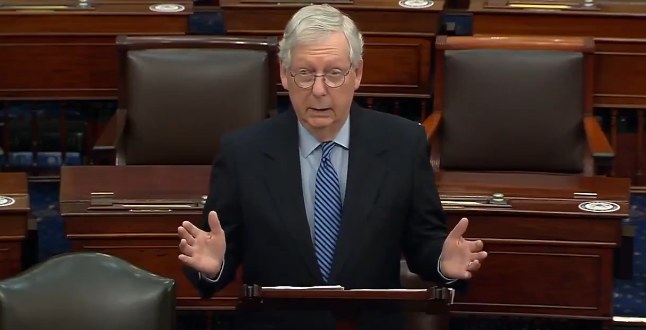 Former President Trump on Thursday renewed his feud with Senate Minority Leader Mitch McConnell (R-Ky.) by calling for Senate Republicans to find a new leader ahead of the midterm elections, suggesting doing so would boost their chances of taking back the upper chamber next year.

Asked by Fox Business’s Maria Bartiromo how Republicans will fare in the 2022 elections, Trump said he expects GOP candidates to do very well but said the party needs new leadership in the Senate.

“I think we’re going to do very well. We need good leadership. Mitch McConnell has not done a great job, I think they should change Mitch McConnell,” Trump said during an hourlong interview Thursday morning.

Former President Trump says he would “certainly” consider Florida Gov. Ron DeSantis as a potential running mate should he decide to mount a third White House campaign in 2024 https://t.co/bqoqp9RRSb

Maria Bartiromo: “I want to move on … ” pic.twitter.com/SdhjUu2z85

Trump Whines About the Raid on His Lawyer, Rudy Giuliani: ‘So Unfair … I Don’t Know What They’re Looking For’ https://t.co/F0LrDhR2Rs