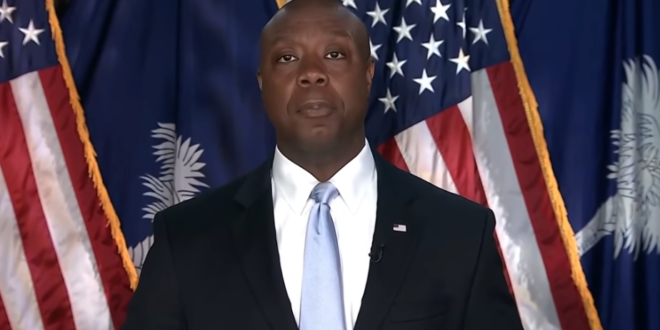 It is Donald Trump, not Democrats, who deserves credit for wresting the coronavirus pandemic under control, Tim Scott argued on Wednesday night as the Republican senator gave his party’s official response to Joe Biden’s first address to Congress.

As the only Black Republican in the US Senate, Scott had been expected to address the issue of racial inequality and the repeated police shootings of Black men, but those hoping for strident criticism of the racial crisis in the US were disappointed, with Scott instead saying, “Hear me clearly, America is not a racist country.”

Sen. Tim Scott, R-S.C., painted President Joe Biden as having broken his promises to seek to unify the country and slammed Democratic policymaking in his response to Biden’s first address to Congress. “Our president seems like a good man. His speech was full of good words,” Scott said.

“But President Biden promised you a specific kind of leadership. He promised to unite a nation. To lower the temperature. To govern for all Americans, no matter how we voted. But three months in, the actions of the president and his party are pulling us further apart,” he said.