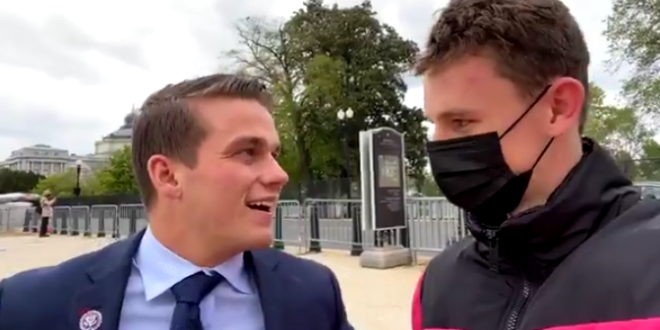 Student Trolls Cruz And Cawthorn On Cancun And Hitler

Washington D.C. student Noah Mitchell ambushed Sen. Ted Cruz (R-TX) and Rep. Madison Cawthorn (R-NC) at the Capitol, asking if they enjoyed their most controversial trips. Mitchell, a political science student living in D.C., pretended to take a selfie with Cruz on Thursday, quickly asking him, “How was Cancún, Senator? It was good?” Realizing that this was not just a fan trying to take a friendly picture, Cruz’s smile quickly disappeared as he walked away.

Read the full article. His encounter below with the QAnon nutbag is actually from back in January but may be the most enjoyable. Over three million views on that one.

Ted Cruz wouldn’t tell me if he enjoyed Cancun 🏖 pic.twitter.com/7qRdWzuC7S

Madison Cawthorn wouldn’t tell me about his trip to Hitler’s house. He denies it… pic.twitter.com/rP7ifI3lXK