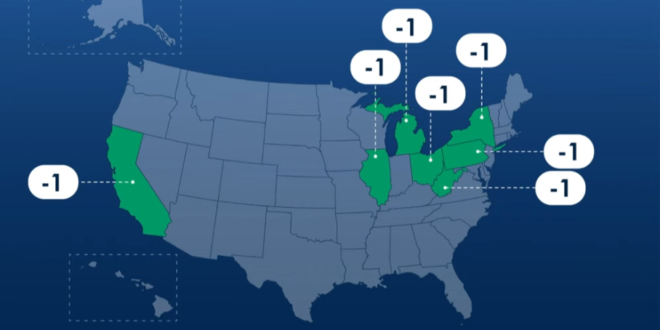 Texas will gain the most new seats in the U.S. House of Representatives under new Census numbers released Monday, while states in the Northeast and Midwest will lose seven seats, shifting some political clout to Republican strongholds before the 2022 midterms.

The U.S. Census Bureau released its every 10 year count of state populations Monday, reshuffling the 435 House seats among the 50 states to account for population changes over the last decade. Those changes alone could be enough to decide the balance of power: Democrats hold a narrow advantage in the House now, with a margin of less than half a dozen seats.

The states gaining seats are largely ones that former President Donald Trump won in 2020, while states President Joe Biden won — including the so-called “Blue Wall” states of the industrial North — are losers.

In New York, 48 of 62 counties are estimated to be losing population. In Illinois, 93 of 101 counties are believed to be shrinking. In 1970, the West and South comprised just under half the U.S. population — today it’s nearly 63 percent.

That is shifting political power: Montana gained a seat, while New York lost one. In all, six states gained congressional seats, including Texas, which gained two, and Colorado, Florida, Oregon, and North Carolina. Seven lost a seat, including California, Pennsylvania, Ohio, Illinois, Michigan and West Virginia.

Breaking News: In the past decade, the U.S. population grew at its slowest rate since the 1930s, driven by lower rates of immigration and births, the Census Bureau said. https://t.co/FRyTwrkire