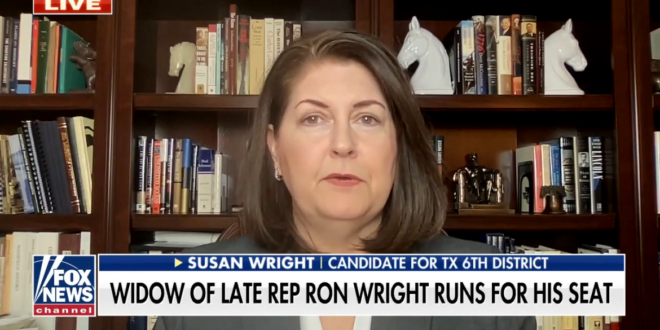 Texas Republican congressional candidate Susan Wright is seeking help from federal law enforcement the day before her special election, after supporters reported receiving robocalls that accused her of being responsible for the death of her late husband.

Wright’s campaign reached out to the Federal Bureau of Investigation and the Department of Justice on Friday after discovering robocalls baselessly alleging that she had “murdered” her husband, the late GOP Rep. Ron Wright.

Wright is running in the special election to succeed Wright, who passed away in February after being diagnosed with coronavirus.

Read the full article. The robocalls reportedly accuse Wright of murdering her husband by purposely contracting COVID after taking out a $1 million insurance policy on him. Hear the call at the link. A whopping 23 candidates are running in tomorrow’s jungle primary. The seat has been in GOP hands since 1983 and Wright has been endorsed by Trump.

NEWS – Texas GOP special election candidate Susan Wright has reached out to the feds after being the target of an 11th-hour robocall accusing her of “murdering” her late husband, Rep. Ron Wright