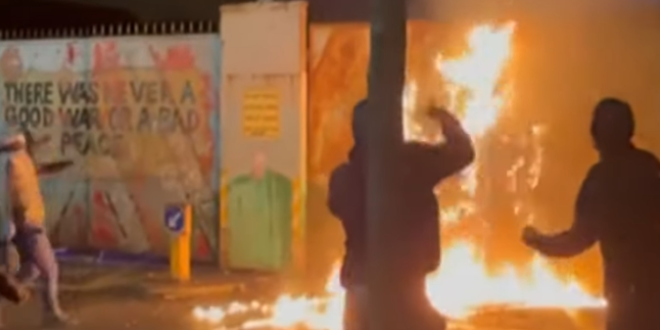 Crowds from Protestant and Catholic communities hurled bricks, fireworks and gasoline bombs at police and each other overnight in Belfast, as a week of street violence escalated.

Police and politicians tried Thursday to calm the volatile situation in Northern Ireland, where Britain’s exit from the European Union has unsettled an uneasy political balance.

The focus of the violence, some of it committed by youths in their early teens, was a concrete “peace wall” in west Belfast that separates a British loyalist Protestant neighborhood from an Irish nationalist Catholic area. The two sides clashed across the wall, while nearby a city bus was hijacked and set on fire.

Crowds from Protestant and Catholic communities hurled bricks, fireworks and gasoline bombs at police and each other overnight in Belfast, as a week of street violence escalated. https://t.co/gtgCTR0gpy

I sincerely hope that the events in Northern Ireland receive the coverage, analysis and attention that they deserve in British media and politics today. pic.twitter.com/nwcrnRe238

I am deeply concerned by the scenes of violence in Northern Ireland, especially attacks on PSNI who are protecting the public and businesses, attacks on a bus driver and the assault of a journalist. The way to resolve differences is through dialogue, not violence or criminality.

Hijacked bus set on fire and gasoline bombs hurled at police in Belfast during at least the fourth night of serious violence in a week in Northern Ireland. https://t.co/8UCVqMRDcy