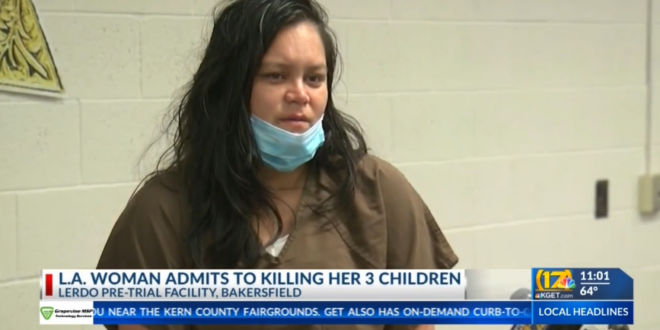 QAnon Mom Killed Kids To “Save” Them From Traffickers

In an exclusive interview with 17 News, the “prime suspect” in the deaths of her three children in Reseda admitted to the killings. Carrillo spoke to 17’s Eytan Wallace on Thursday afternoon. She admitted to drowning the children, she says to protect them from their father who she alleges was involved in human trafficking.

Carrillo and her estranged husband, Erik Denton, were involved in a bitter custody dispute. “I drowned them. I did it as softly, I don’t know how to explain it,” Carrillo said. “I hugged them. I kissed them. I was apologizing the whole time. I loved my kids.”

More recently, she began to echo the delusion of QAnon believers. She was consumed by the idea that Porterville, Calif., was the site of a child sex-trafficking ring, according to court records, and contended that the blame for the pandemic rested on her shoulders.

She started making wild allegations of child abuse, according to court records. Social workers and police in two counties got involved.

The children’s father, Erik Denton, convinced a judge to award him physical custody of their three children, saying Carrillo was experiencing a psychotic episode and he feared for the kids’ well-being.