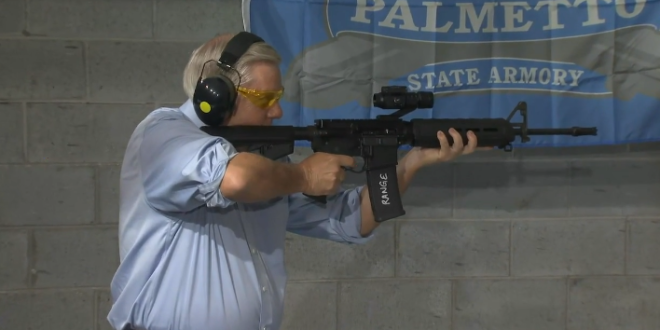 U.S. Senator Lindsey Graham visited Palmetto State Armory in Greenville Thursday to show his support for the Second Amendment, according to a release from his office.

Graham fired off some practice rounds at the shooting range’s indoor range and then spoke with reporters about his opposition to the Assault Weapons Ban.

“If there’s a natural disaster in South Carolina where the cops can’t protect my neighborhood, my house will be the last ones that the gangs will come to because I can defend myself,” he told Fox News host Chris Wallace over the weekend.

In 1994, there was an Assault Weapons Ban – the evidence indicates that there was really no change at all in crime, because the crooks are going to get a gun!

Today at @PalmettoArmory I fired one of the weapons they are trying to ban. #2A pic.twitter.com/XI985BZ96F

Now, why would anybody need to own an AR-15?

If there is a breakdown of law and order, and that can happen — we’ve seen it happen in our major cities.

Remember Hugo, where people were isolated for days? Remember Katrina?

It’s not impossible to find yourself in the modern world without any police protection, because that’s just the way the times are in which we live in.

We’re talking about defunding the police!