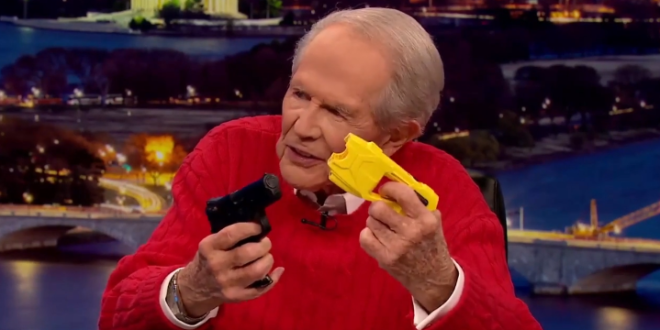 Pat Robertson Gets Woke On Police Shootings, Does Demo On “Clowns” Who Can’t Tell Guns From Tasers

“There’s just no comparison. Now how she made the difference, when she shot that poor guy to death, saying this is what I thought was my Taser. And if you can’t tell the difference in the feel of those things, it’s crazy.

“You know I am pro police folks, I think we need the police, we need their service, and they do a good job, but if they don’t stop this onslaught…they cannot do this.

“I think the problem is they’ve got to pay them more. We don’t have the finest in the police department. They’re low-paid people, Terry, they don’t get adequate… It’s not a question of training, it’s a question of hiring a more superior workforce, and we aren’t doing it.

“But we need police, we need them, and we need to honor them, and I’m all for it, but at the same time we cannot have a bunch of clowns running around who are underpaid and who really are not the best and brightest.

“We’ve got to have the best in there.” – Pat Robertson, wielding “toy” versions of the weapons involved in the killing of Daunte Wright.

Robertson went on to eviscerate Derek Chauvin, saying “they ought to put him under the jail” for what he did to George Floyd.

Who had “Woke Pat Robertson” on their 2021 bingo card? pic.twitter.com/nCYlQsma3O

Did not see this coming: Pat Robertson Does Taser/Glock Demo On Air, Goes OFF on Cops: ‘We Don’t Have the Finest in the Police Department’ https://t.co/xQt7lyRcME via @mediaite