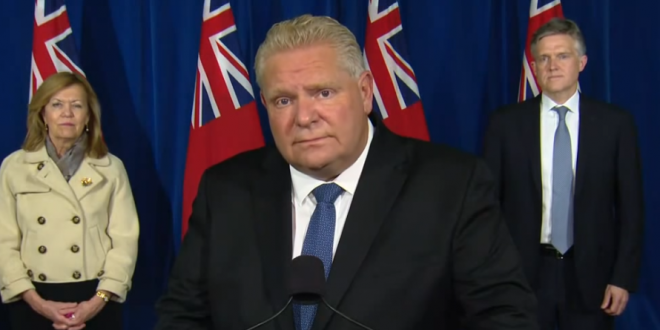 Ontario declared a four-week state of emergency after hitting a record for the number of Covid-19 patients in intensive care, driven by virus strains that are more contagious and dangerous.

The order imposes restrictions on businesses and residents across the Canadian province of 14.7 million people, beginning today.

Restaurants won’t be allowed to serve customers except for takeout and delivery orders; indoor public events are banned, with a few exceptions. Supermarkets and pharmacies will operate at 50% capacity and other retailers at 25%.

Ontario announced a province-wide “emergency brake” shutdown beginning this weekend as Canada’s most populous province struggles to cope with a surge in ICU admissions that provincial leaders said they feared was fueled by rapidly spreading coronavirus variants.

“The new variants are far more dangerous than before. They spread faster and do more harm than the virus we were fighting last year,” Ontario Premier Doug Ford said during a news conference in Toronto on Thursday. “This is a new pandemic. We’re fighting a new enemy.”

Effective April 3 at 12:01 a.m., Ontario is restricting indoor organized public events & social gatherings, except with members of the same household (the people you live with) & limiting the capacity for outdoor events to a 5-person maximum.

Previous Airlines Hail CDC Guidance On Travel For Vaccinated
Next Georgia Gov: We Lost The All-Star Game Over “Big Lie”