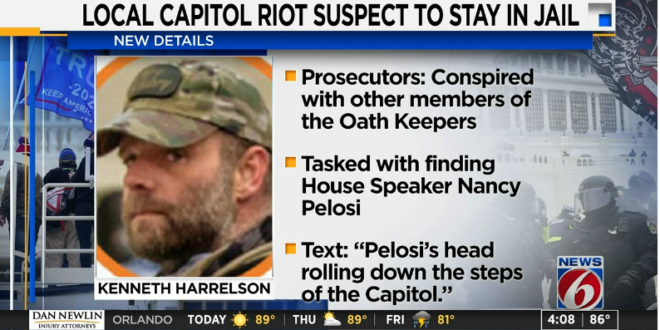 A federal judge ruled a Titusville man will stay in jail until his trial on charges that he conspired with others to storm the U.S. Capitol on Jan. 6. Kenneth Harrelson’s attorney had asked the judge to grant Harrelson bond after he was denied the change to leave jail by a federal magistrate in Orlando in March.

During a two-and-a-half hour court hearing in Washington, prosecutors alleged Harrelson conspired with other members of the Oath Keepers to break into the Capitol building.

They also claimed Harrelson was the leader of ground operations for the group that day, with the task of finding House Speaker Nancy Pelosi. Prosecutors allege one of his co-conspirators texted Harrelson, saying they wanted “Pelosi’s head rolling down the steps of the Capitol.”

More from the Orlando Sentinel:

Surveillance footage shows Harrelson transporting a luggage dolly with an apparent rifle case at a nearby hotel shortly before the riot. Harrelson’s attorney said he was “not an active contributor” in planning the riot and was not a threat to the community. She also said Harrelson was not receiving adequate treatment for his high blood pressure at the jail.

During a court hearing, prosecutors alleged Kenneth Harrelson conspired with other Oath Keepers members to break into the Capitol building. They also claimed he was the leader of ground operations, with the task of finding House Speaker Nancy Pelosi. https://t.co/FfVqOkqq4K