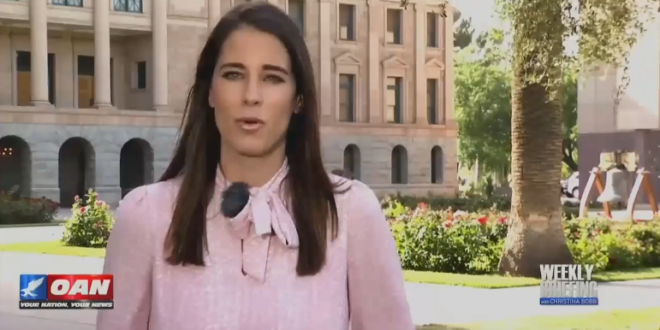 OAN Host: “Joe Biden Is Not A Legitimate President”

“The only reason the last four months make any sense is because we can all now see that Joe Biden is not a legitimate president. The so-called Biden administration is a group of radicals that nobody wanted in power — Kamala Harris — and they devised an evil scheme to steal our election, and did so successfully thanks in large part to greedy Republicans who refused to fight back. They wanted their title and didn’t care about the state of our country.

“The Arizona election audit has begun and the entire country knows it will unravel the Democrats’ schemes from 2020. That’s why they’re so scared, and that’s also why they’re making crazy radical power plays like trying to pack the Supreme Court and H.R. 1. They know we’re onto them, and we will get rid of them. They must solidify their power by any means necessary because they know their days are numbered.

“There’s no hiding anymore. They’ve been caught. They’ve been caught in bed with China, Russia, and Ukraine. They are partnering with our adversaries against us. They want world control and domination. The United States’ Constitution and everything we stand for is in the way. Donald Trump is in the way. They may have successfully removed him from the White House, but they haven’t taken his power.” – OAN host Christina Bobb.