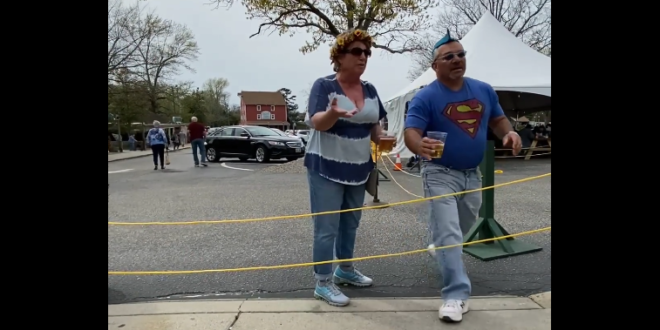 A vice principal at a Monmouth County school is under investigation after a social media post shows him angrily throwing a cup of beer at restaurant patrons in Atlantic County this past weekend.

The drink toss by Michael Smurro occurred after his wife argued with patrons over an apparent transgender woman using the women’s bathroom with her at the restaurant, Fred & Ethel’s Lantern Light and Tavern in Smithville, Galloway Township on Saturday.

Smurro is a vice principal at Neptune Middle School, in Neptune Township. The district’s superintendent, Tami Crader, said Monday morning she’d just learned of the incident and it is under investigation, “and will be taken seriously.”

Three videos posted on Facebook show the events on Saturday, beginning with the woman talking about someone using the women’s restroom who she claims is a man. “It’s not OK,” the woman says several times as the video begins, talking to a diner at another table. “She’s a man using my bathroom.”

“She literally just started going off, loud as hell, without cause,” said the woman who shot the videos, asking that she only be identified by her first name, Carrie, for safety reasons. Carrie’s waitress then tells Smurro, who is by then outside the ropes of the outdoor dining area, that she needs to leave.

At that point, Michael Smurro then walks back to where his wife is, and tosses his beer toward Carrie’s boyfriend. “Here you go, pal,” he says. “There you go. There you go.” Then, as Smurro backs up he repeats, “Now you can come out” several times, motioning with both hands toward himself.

GALLOWAY TOWNSHIP — A Monmouth County vice principal is under investigation by his district after he was seen on video throwing beer at Smithville restaurant diners Saturday. https://t.co/9NaFi9sMZO

UPDATE: meet Lisa and Mike, everybody

If your grandparents were dressed like children in Historic Smithville this afternoon check this out! Let’s see if we can get some ID on these monsters