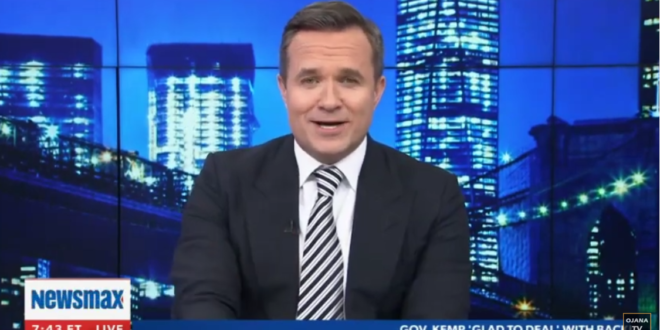 Newsmax Host: I Smoked Weed And Woke Up In Kenya

Newsmax anchor Greg Kelly baffled people on Twitter after sharing his thoughts about cannabis that included a couple of details that pretty much no one believes are actually true.

Kelly’s Twitter account contains a lot of uh, incoherent content like this. For instance, he recently accused President Joe Biden of not actually owning his dogs Champ and Major (arguing it’s a “political stunt).

And he also railed against his local McDonald’s — which he insisted on spelling as “MacDonalds” — for no longer serving the “McFish” sandwich. But this new tweet, which appears to be inspired by Hunter Biden’s memoir and the legalization of cannabis in New York, is something special all on its own.

SMOKING WEED (aka GRASS) is NOT a good idea. I’ve tried it (back in the day) and it was WORSE than anything that happened to HUNTER BIDEN. I “toked up” with some buddies in Kentucky and woke up 4 days later in Nairobi, Kenya. With no idea what happened. DON’T DO DRUGS.

Remember ⁦@JoeBiden⁩’s BASEMENT? Did anyone ever see or hear a DOG? I never heard any BARKING, HOWLING, RUNNING or SLOBBERING (well a little Slobbering, but that was Joe) THESE DOGS CAME OUT OF NOWHERE. A POLITICAL STUNT. JOE, RETURN THE DOGS, THEY’RE NOT YOURS! pic.twitter.com/rmUhYh6IYa

Here’s ⁦Doctor Jill Biden (who’s not a doctor) trying to have a “Moment” with a dog that’s probably not even hers. RECAP: in 3 months, the Biden dogs have 1. Been blamed for breaking Joe Biden’s leg 2. Bitten one Secret Service Agent 3. Bitten on Park Ranger. What next? pic.twitter.com/qLln6h9m1k

Somebody has to name a strain “Nairobi Express” in honor of this real tweet from a dude who a fascist cult considers a real source of news. https://t.co/4YFMZHdv9P

My cousin did 5 Marijuanas and now he’s a dog.

SMOKING (Drug) is NOT a good idea. I’ve tried it and it was WORSE than anything that happened to (celebrity). I (slang for drug use) with some buddies in (State) and woke up (number) days later in (Foreign City) with no idea what happened. DON’T DO DRUGS.

Previous CHATTER AWAY: Overnight Open Thread
Next Barr Avoided Gaetz After Being Told Of Sex Probe