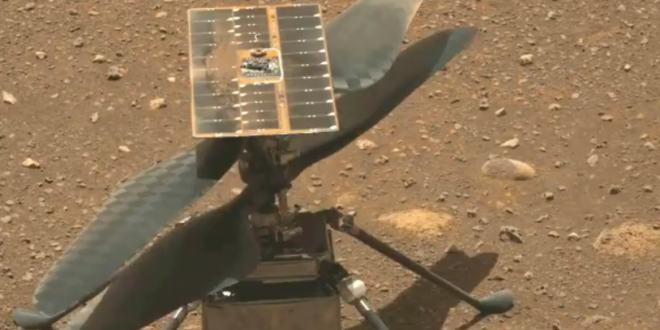 NASA successfully flew its four-pound helicopter from the surface of Mars early Monday, the first powered flight of an aircraft on another planet, a feat NASA officials compared to the Wright brothers first flight in 1903.

At about 3:30 a.m., the twin, carbon-fiber rotor blades began spinning furiously, and the chopper, called Ingenuity, lifted off the surface of the Red Planet, reaching an altitude of about 10-feet, where it hovered, turned and landed softly in an autonomous flight that lasted just 30 seconds//, the space agency said.

Inside the flight operations center at NASA’s Jet Propulsion Laboratory in California, engineers broke into applause when confirmation of the flight arrived in a data burst that took about three hours to travel the 178 million miles from Mars to Earth.

NASA’s Ingenuity helicopter takes flight on Mars, the first time an aircraft has flown on another planet https://t.co/iCLNZA8XSt

Perseverance got us to Mars. With Ingenuity, we soar higher.

The #MarsHelicopter made history today by being the first craft to achieve controlled, powered flight on a planet beyond Earth.

NASA makes history by flying a helicopter on Mars for the first time https://t.co/0EC96MXTUl by @etherington