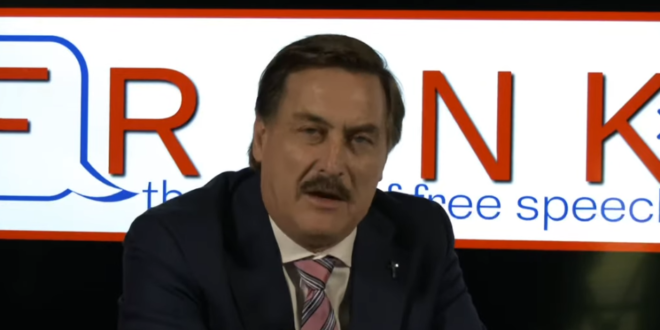 MyPillow’s suit seeks more than $1.6 billion in damages. In the complaint, the privately held company says that it is suing to protect free speech and to remedy harms that MyPillow says it has suffered.

“This lawsuit is brought in support of the marketplace of ideas and the remedy the grave harm that has been suffered by MyPillow as a result of Dominion’s suppression of speech and attacks on the company,” the suit claims.

During what was billed as the debut of a new social media platform, FrankSpeech.com, Lindell appeared on live streaming video to say that the site had failed to launch due to hackers.

“And what a day to do this on the same day of launching Frank and they did everything they could all night long, destroying, destroying us,” Lindell added.

“And we got live to you, we got live early. You’re not going to be able to put in your profiles like we said until, um, sometime today.”

In the clip below, Lindell points to what he claims is a live counter of people attempting to access his social media platform. As you’ll see, even his live-stream glitches out.