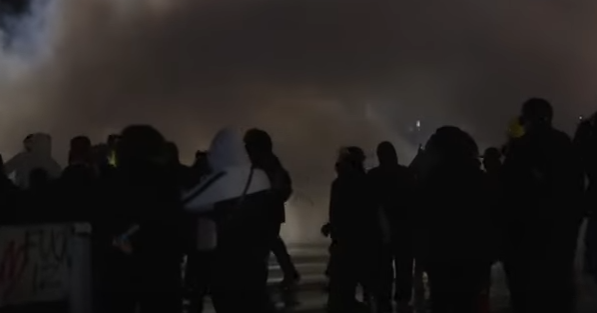 By shortly before 8 p.m. Monday, police began to warn demonstrators, who still numbered in the hundreds, that they were in violation of curfew.

Authorities fired multiple rounds of tear gas, along with rubber bullets and flash grenades. Protesters dispersed from areas hit by tear gas were regrouping and retaliating by throwing water bottles and launching fireworks.

Later, lines of police in riot gear pushed groups of protesters away from the station. At a strip mall near the police station, looters broke into several businesses, including a Dollar Tree store where flames were later spotted.

Previous GOP Rep To Sue Over Fines For Evading Metal Detectors
Next Fox Host: I Won’t Get Vaccine And You Can’t Make Me