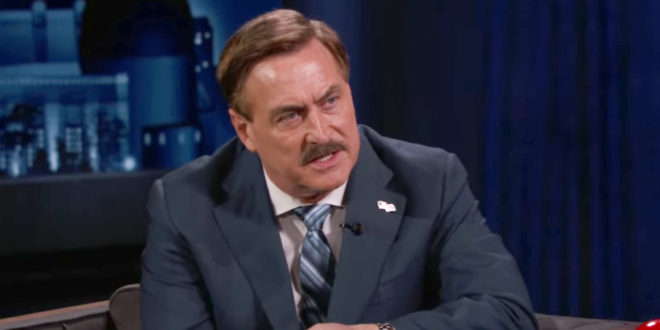 The controversial executive, who has been banned from Twitter and is currently being sued for pushing wild conspiracy theories and disinformation that the 2020 election was rigged, began his interview with host Jimmy Kimmel talking about the coronavirus and whether or not Lindell had been vaccinated, to which he confirmed that he hasn’t.

The late-night host told Lindell about the backlash to him appearing on the show. “But I think it’s important that we talk to each other,” he told Lindell, before declaring, “I don’t think there’s any validity to the things you’re saying.” Kimmel noted how some people could draw a line between some of Lindell’s ideas, and the riots at the U.S. Capitol.

During a nearly 20-minute conversation, Kimmel tried to get to the bottom of why Lindell became an ardent supporter of former President Donald Trump and why he continued to claim that the 2020 election was stolen.

“All we need is to look at the machines. If there is nothing to hide, why won’t they let the American people look at them?” Lindell said, parroting his baseless claims that the voting-machine maker Dominion Voting Systems had tampered with votes during the 2020 election.

Anyone looking for a decisive gotcha moment (from either the “rigged election!” or “living in actual reality” side) was disappointed, as Kimmel essentially allowed Lindell (in studio despite bragging about not being vaccinated against COVID) to repeat his beyond-debunked nonsense, only offering up Kimmel’s signature brand of bro-smirky jabs as counter-argument.

And while it might have been unseemly should Lindell have been unwise enough to submit to an interview with someone with more of a taste for late-night blood like John Oliver or Stephen Colbert, this appearance did nothing to cover either Lindell or Kimmel with dialectical glory.

Kimmel danced between chary mockery of Lindell’s past substance abuse problems, and genuine concern that the in-over-his-head pillow magnate is going to “be out dressed as Spider-Man on Hollywood Boulevard at the end of this.”