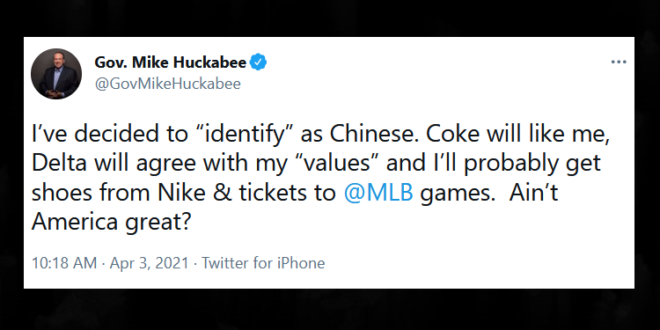 Amid a raging upsurge in attacks on Asian Americans, former Arkansas Republican Gov. Mike Huckabee posted an outrageously dismissive, mocking tweet about people of Chinese ancestry in America. Huckabee appeared to be mocking a connection between opposition to racist hate and concerns about vote suppression in Georgia and free speech criticism against it. Both Coca-Cola and Delta, which are headquartered in Atlanta, have spoken out strongly against Georgia’s new law.

I’ve decided to “identify” as Chinese. Coke will like me, Delta will agree with my “values” and I’ll probably get shoes from Nike & tickets to @MLB games. Ain’t America great?

Mike, I’ve shared a meal with you at your beautiful table. I’ve heard you profess Christ as Lord. This is entirely antithetical to the gospel.

Hi @BethMooreLPM I love you & appreciate your ministry. I don’t take Twitter or myself that seriously but I do take gospel seriously. I truly wish you only joy & continued blessings. May the power of the resurrection lift you to high places this Easter weekend my dear sister! https://t.co/VwFcAefden