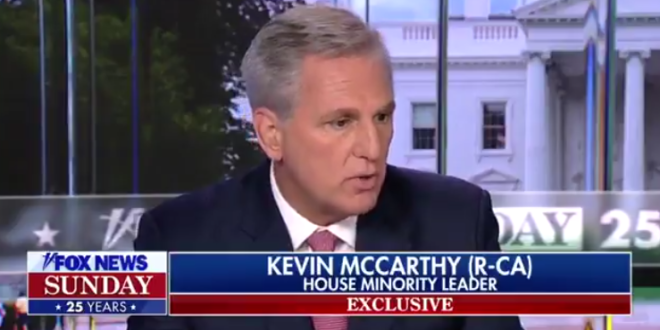 House Minority Leader Kevin McCarthy (R-Calif.) said Sunday that President Biden’s first 100 days in office amounted to a “bait and switch,” and accused the president of pushing policies that were to the left of those he promised during the campaign.

In an interview with Chris Wallace on “Fox News Sunday,” McCarthy argued that Biden had promised to govern as a “moderate” during the campaign, while instead acting like a “socialist” since taking office.

“If I look at the 100 days, it’s more of a bait and switch,” McCarthy said. McCarthy said that despite promising bipartisanship, Biden has not met with him or spoken to him since taking office.

Kevin McCarthy refuses to answer Chris Wallace’s question about whether it’s true that Trump told him, “Well Kevin, I guess these people are more upset about the election than you are” when McCarthy called and urged him to call off the insurrectionists on January 6 pic.twitter.com/cSYSPUs8OO

McCarthy defends Trump’s response during Jan. 6 riot. Said on Fox that Trump didn’t see what was happening until he called him. Trump said “he will make sure he put something out to stop this. That’s what he did and he put a video out later.” (Trump’s video was widely criticized)

House Minority Leader Kevin McCarthy praises Trump on Jan. 6, saying on Fox that he called off the attack with the video — in which Trump lied the election was stolen and said he loved the insurrectionists.