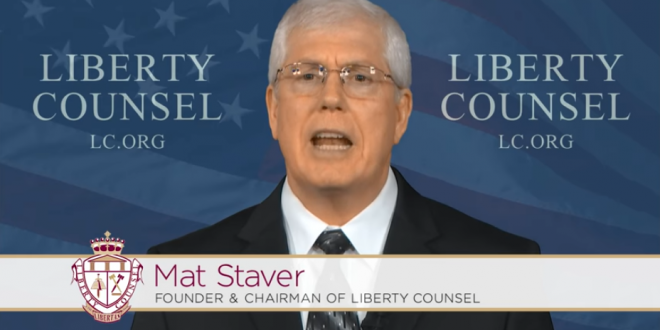 Mat Staver: The Fake News Is Hiding The COVID Cure Because They’re In Cahoots With Big Tech, Send Money

Long before COVID, a plan was hatched to steal your freedom.

COVID was the springboard to get people to give up freedom for “safety.” Now dark forces are pushing the greatest crackdown on freedom yet – it comes straight from Communist China under the guise of a “vaccine passport” to restrict travel and entry to businesses and events based on the government’s directives.

Will America bow to Big Tech and an app that will track where you buy groceries, dine, shop, work, attend school, attend a political rally or even go to church? A few states are now pushing back, but we need more pushback!

Make your voice heard now for freedom! Send a fax to the governors and federal legislators who can protect freedom in their states from these mandatory vaccine passports. — Mat

Long before COVID-19, Bill Gates was already preparing. He did a TED Talk on epidemics in 2015. It was telling that the very first thing he prioritized was not medicine or hospital supplies. No, the first thing Bill Gates was pushing for in an epidemic was “surveillance & data.”

Less than two months into COVID, when most people were hoping it would soon be over, major tech groups were positioning massive technological changes, constant surveillance and social control.

Fake news outlets were already hiding the fact that Australian scientists had found a treatment for COVID. These scientists proved that Ivermectin killed 99.8% of COVID within 48 hours in a lab setting!

Ivermectin is very inexpensive. But if there was a cure with existing medicines and no widespread fear, there would be no acceptance of mass surveillance.

We can win this fight if we work together! So far, two governors have taken action to ban vaccine passports in their states (Texas and Florida).

Please consider DOUBLING the impact of your gift today through our Challenge Grant. We are already reaching out to other governors and asking them to act now. Your gift will empower us to do more to fight this, as well as to fund the legal fight to keep religious freedom FREE.

Previous NCAA: No Championships For Anti-Transgender States
Next Nikki Haley: I Won’t Run For WH In 2024 If Trump Does