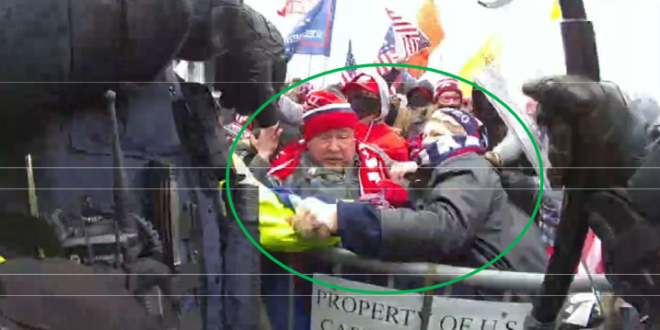 The Department of Justice says that a Forestburg, Texas couple was arrested on Wednesday, April 21 for allegedly assaulting cops who were dispatched to man barricades at the U.S. Capitol on Jan. 6. Mark Middleton, 52, and Jalise Middleton, 51, made their first appearances in federal court on Thursday in the Lone Star State.

“We are on the front lines. We helped push down the barriers. Jalise and I got pepper sprayed, clubbed, and tear gassed. We had to retreat, but more patriots pushed forward, and they’re taking back our house,” Mark Middleton was quoted as saying.

Jalise Middleton allegedly admitted in Facebook comments that she and her husband “fought cops,” were “on the front lines,” and ultimately got “bruised and pepper sprayed.”

Mark Middleton and Jalise Middleton of Texas have been charged in connection with the Capitol attack. The feds say both assaulted police officers while wearing Trump hats. pic.twitter.com/acCxQVScxz

NEW: The @FBIDallas has charged a husband and wife — Mark and Jalise Middleton — with Assault and additional charges that allegedly took place at the Capitol Building on Jan. 6. The two from Forestburg are the 21st and 22nd arrests from north Texas related to the Capitol. @FOX4 pic.twitter.com/UqXQEfzFlw

The FBI says Mark and Jalise Middleton hit officers and jabbed them with flags during the Jan. 6 riot at the U.S. Capitol.​ https://t.co/hzUrhc7rsT

“They did break windows to get in, but we’re not tearing anything up. It is simply a notification that we can get to you, we mean business, do what’s right! Patriots don’t stoop low like Antifa.” https://t.co/nnxzFzvG84 pic.twitter.com/hezmGWZ9bx