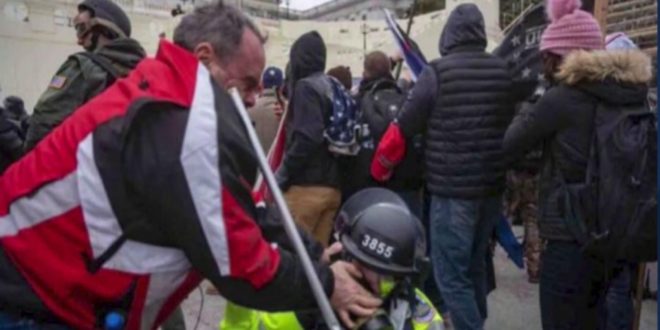 An attorney representing a MAGA rioter who infamously gouged a Metropolitan Police officer’s eyes argued on Friday that his client doesn’t deserve to be held in a cell with people who have committed “inner-city crimes.”

Webster was caught on camera assaulting a member of Washington D.C.’s Metropolitan Police force during the January 6th riots when he both gouged an officer’s eyes and beat him with a flag pole.

Lawyer for Tommy Webster, retired NYPD cop accused of beating an MPD officer with flagpole on #J6, says his client is in a “dormitory setting” with people serving time for “inner-city crimes” – “for a middle aged guy whose never been arrested before this has been a shock for him”

Lawyer for eye-gouging MAGA rioter whines that his client is in jail with people who did ‘inner-city crimes’ https://t.co/mDotImSAzZ

Previous Another Gaetz Aide Quits: This Place Is Like TMZ
Next DeSantis Sues Biden Admin To Reopen Cruise Industry